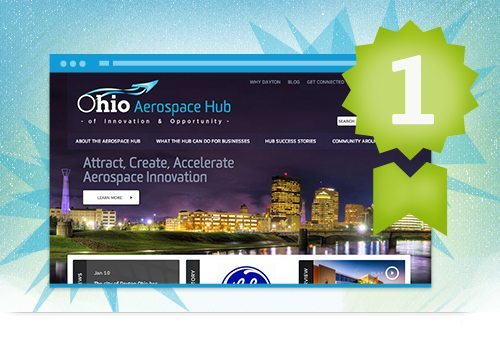 A few years back, I was working as special projects manager for the City of Dayton. The city needed a firm to take on a unique assignment: creating a website for the Ohio Aerospace Hub. Dayton earned the Hub title in 2009, an initiative to draw aerospace-related jobs, education, and economic development (read: cash money) to the region.

Researchers partnering with the Ohio Aerospace Hub are up to all kinds of crazy stuff: advanced sensing, drone technology, cybersecurity, you name it. The Hub needed a website to show off its research to the world.

But the website had to do more than just inform. The Ohio Aerospace Hub will require significant investment over time—not to mention an A-team of scientists and engineers to get things done. Now, we locals already know how cool Dayton is. But the city wanted to raise its profile by attracting a new segment of people: techies, creative types, entrepreneurs, and businesses keen on Dayton’s new aerospace economy. That’s a tall order for one little website—but Atomic was up to the task.

In the search for the perfect firm for the job, Atomic really set themselves apart. (It also led to my job here—but that’s a different story.) Throughout the development process, there was great collaboration between the guys at Atomic, the director of the Hub, and all of the partners involved. The result: an awesome site—that got people talking as soon as it launched.

I’m proud of what our team has accomplished. Now, Atomic is ready to help the Ohio Aerospace Hub move forward as its research products take flight. (Plus, maybe they’ll finally let us give their latest gadgets a try. Fingers crossed.)

We can’t wait to see what the Hub does next.

Five Questions to Ask Before Opening an Online Store

Moving Beyond the Fold
Scroll to top